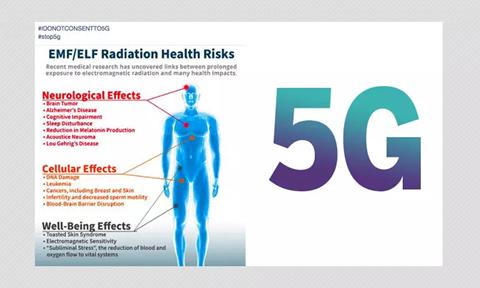 With the assurances of quicker browsing, uploading, and downloading speed, as well as improved connection, 5G may appear to be logical development for our increasingly tech-department culture. But, in addition to these facilities, 5G has been aimed to increase capacity and reduce latency. Many government agencies and companies are advising that there is no reason for concern about the impact of radiofrequency radiation on human health as 5G is steadily spreading throughout the world. However, some specialists are firmly opposing. These developments will have a significant impact on how rapidly we implement technology in our daily life for integrated applications like robots, self-driving vehicles, and medical gadgets. The utilization of high-frequency bandwidths across the electromagnetic spectrum will be the backbone of 5G technology. But how and what does the 5G would affect our health? This article examines electromagnetic radiation, how it affects human health, the controversies around radiofrequency networks, and what this implies for the arrival of 5G technology.

The image above gives a brief insight into what 5G is supposed to be.

Irrespective of the flow of electric supply where ever there are power lines or outlets, electric fields are bound to be generated. But the magnetic fields form only when electricity is applied. These, when combined, generate EMFs.  The passage of electricity results in the generation of EMF due to electromagnetic radiation. People are exposed mainly to R(adio) F(requency) e(lectro)m(agnetic) f(ields) through portable devices like mobile phones, tablets, or medical applications. Heating is the most well-known health-based consequence of R(adio) F(requency) e(lectro)m(agnetic) f(ields). Exposure to high doses of the same results in burning tissues that are exposed due to a rise in temperature. However, devices like mobile phones produce low level R(adio) F(requency) e(lectro)m(agnetic) f(ields). Is this the reason for the concern related to the 5G network?

According to the research conducted by some worldwide scientists from IARC, they determined that high exposure to the R(adio) F(requency)-EMFs of glioma can be a possibility of cancer. Their trials proved a little possibility of vestibular schwannoma occurring but there was very low evidence for any other cancer to occur. Due to the low evidence in experimental animals and humans, R(adio) F(requency)-EMF was classified as the possibility of cancer in humans. Despite all the research and the classification WHO says that there are no adverse health effects. WHO in present states the R(adio) f(requency)-EMFs should be considered harmless to biological tissues as the long-term exposure to low level of radiofrequency has been proven to be harmless, but this area is continuously being researched.

5G is arriving with the assurance of a better network and improved connectivity. This means increased coverage and bandwidth to let our massive amounts of data flow from one point to another.

To build this network at the higher end of R(adio) F(requency)-E(lectro)M(agnetic)F(ield) spectrum, new base stations are needed to be established around the world. This is necessary because there is a shorter range for high-frequency radio waves as compared to low-frequency. The data to be transferred relatively short distances will be the reason for a better service in the area of high network usage. But with our lives getting easier with faster browsing, health applications, driverless cars, and connectivity to IoT devices but won’t this impact of increased radio frequencies affect our health? The team of several researchers that have been continuously researching the impact of the situation in question on our health have given their recommendations about more meticulous testing and collection of more vital data about the biological impact of these radiations. It is certainly proved that exposure to a small increase in these radiations can result in the development of certain cancers and more concerning health issues. To those who live in densely populated areas, there’s no possible breakout from the radio waves all around them. To reduce the exposure the FDA suggests reducing the time interval that is devoted with cell phones and keep distance between devices and our head. There are some long-term studies to explore the exposure to these radiations like COSMOS in 2007. These types of studies aim in observing a lot of people for a large amount of time find changes in their health outcomes due to cell phone usage. But these studies need a lot more time to give any outcome either good or bad, time will tell.

Some insight on radiation sickness:

There is a variety of essential applications, including energy generation, sterilizing equipment, and carbonating archeological findings that require radiation to function. Ionization particles are generated when the nucleus of a volatile atom decays, resulting in the emission of radiation. When these particles come into contact with human tissues, they can be dangerous if the concentration is high enough, even if just for a short time.

We are surrounded by radiation in today’s society, which is used in a range of applications that are totally safe for us. Radiation poisoning can happen because of a number of sources like nuclear accidents, radiation-related work environments, and many more. The effect of radiation depends upon the amount is exposed it could be just mild side-effects or even life-threatening. Until now there has not been any cure but as it is said prevention is better than remedy. There are several ways to avoid radiation like cement walls block radiation the thickness of the wall also matters and there are several medications that are used to get rid of a small amount of radiation from our body. Radiation poisoning occurs when a radioactive material emits particles that enter the body and cause damage. The properties of various radioactive compounds vary. They may both damage and cure people, and some are more dangerous than others. Radiation may be measured in a variety of ways, such as rems, rads, and so on.

The effect of radiation sickness can be visible instantaneously after exposure or can have an incubation period of several years. The intensity of exposure witnessed decides the symptoms of the same. There are several stages of radiation sickness, such as a shorter stage or a latent stage. In the prior stage, sickness can last for a minimum of few minutes to several days and in the later stage the patient appears to have healed but the condition persists. Then there’s the evident stage, which can lead to cancer. The disease can recover slowly or in some cases can even be lethal and result in death. The real answer to whether 5G is hazardous or not is still under a lot of controversy until the matter is still under research.