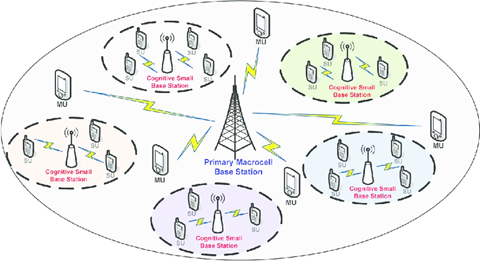 In the modern world, the rapid increase in the traffic on the networks already is indicating the need for an evolution of the current radio access networks. 5G wireless networks use ultra-dense small cells for efficient cognitive radio segmentation. It is to be anticipated that 5G will be offering up to three orders of magnitude greater network capacity, expansive quality-of-service levels per user in an energy-efficient manner. The concept of small cells is not new but ultra-dense networks have the objective to go further than the cellular offloading utilization by revisiting present radio network methods. In every five years, data rates are expected to grow by a ratio of ‘ten’. The Cognitive wireless network delivers better data rates and capacity since customers choose to download data rather than make voice conversations, utilizing increased radio access and decision-making algorithms.  Spectrum efficiency is governed by a number of factors, including key audience availability assessment, selection of acceptable and short transmission connections, and traffic allocation between site access points. As a result, user identification and access point lineup are critical aspects for ultra-dense radio networks that use dispersed tiny cells. These features, in particular, can mitigate the effects of overlapping coverage areas and define the instantaneous power of access points in multi-shaped coverage areas, as specified by the IEEE 802.22 standard for cognitive wireless regional area networks. In recognized network design frameworks, the assumptions of spectrum scarcity and high deployment costs have influenced the network topology of contemporary cellular systems such as 4G LTE standards. The small cell strategy in cognitive radio communications is motivated by the conceptual framework of intense network slicing combined with novel spectrum coexistence techniques for efficient spectrum use.

Because of spectrum scarcity and rising capacity demand, macrocells must share their spectrum band with small cells, making all channels broadly accessible for the whole cognitive radio network. The following problems should be considered in any possible adoption of cognitive radio small cells to allow such spectrum sharing.

It proceeds by scanning the spectrum for spectrum utilization in order to identify free channel intervals. Local shadowing phenomena may impair the accuracy of acquired sensing data on channel conditions, resulting in interference. As a result, from a network standpoint, cooperative sensing techniques and exchanging knowledge on channel availability amongst tiny cells are the primary answers. Furthermore, enhancing sensing mechanisms through more complex sensing intervals may greatly enhance resource allocation from a system-level perspective.

Spectrum access management has a particularly large influence on HetNets that use macro and small cells. By deploying tiny cells in the unlicensed band, macrocell networks can gain access to more spectrum, resulting in a series of shifts in signaling control across various cell domains. Consequently, it is critical to have an architectural network design that incorporates multi-radio interface technologies in order for the infrastructure to function as a whole.

In real-world network deployments, one of the primary causes of increased interference in ultra-dense networks is the unplanned placement of small cells. Because of the overlap between this kind of cell in channels and domains, the issue is exacerbated by cognitive small cells. The impact of interference is determined by the transmitted strength, bandwidth utilized, cell density, and channel access technique employed.

When compared to conventional mobile networks, channel management is one of the most important elements of dynamic spectrum access. Spectrum technology adoption is outpacing spectrum allocation determination. As frequency bands or open white holes grow more uncommon and unavailable for the next generation of wireless technology, a wide range of services will require a radio spectrum to function correctly. This motivates the industry and scientific groups to consider developing radio interfaces and wireless infrastructure modifications.

The combination of licensed and unlicensed bands allows for increased user throughput and improved connection. As a result, the spectrum choice feature in every cognitive small cell permits access to both licensed and unlicensed bands at the same time. However, the lack of a specified model for network topology complicates user management and channel accessibility in dense networks. As a solution, cognitive small cells can be integrated with the cellular network if they are equipped with the required decision-making entities that take into account a collection of cognitive radio network principles, such as learned or transferred information.

Each access point in the simulated scenarios has two end-users. We allocate one major group to each of the 14 channels in the unlicensed 5 GHz range to create a dynamic spectrum model for cognitive communications.

These principal users can broadcast at varied time intervals, leaving varying amounts of time gaps for the cognitive radio network. The dynamic spectrum gaps on the primary network side were produced by adjusting the packet generation time and packet length in relation to the total simulation period. At free time spans, small cells are given the option to access the available free channels. We apply the identical traffic load to all deployed nodes in our simulation scenarios. Traffic is therefore scaled in accordance with the number of nodes deployed in each simulated scenario. As a consequence, the number of tiny cells in our data matches the network traffic. Regardless of the coexistence model chosen to integrate additional small cells, there is a balance between the network structure and the resources available to cognitive radio users. As a result, network planners must assure the stability and continuity of a network topology that employs ultra-dense tiny cells as an expansion to the network coverage area or as a mechanism for spatial spectrum slicing.

How it can work even better:

When the number of tiny cells in the simulated model crosses a certain threshold, the overall system performance begins to deteriorate in terms of throughput percentage drop. The rationale is that small cells increase the coverage area and spectrum access until a certain number of small cells are deployed, at which time the deployed small cells exceed the open spectrum intervals given to the cognitive radio network. When this happens, the cognitive tiny cells begin to compete with one another, generating greater interference and backoffs for one another. Each of the simulated cohabitation models achieves the same result. However, as compared to other coexistence methods, the non-overlapped space-filling approach for cognitive small cell coexistence exhibits a larger number of hosted new small cells. The total number of deployed cognitive small cells is determined by the size of the macrocell and the number of channels accessible to the cognitive macrocell. The latency begins to increase again as the number of deployed tiny cells grows, especially when the available resources for cognitive communications are exceeded, forcing more packets to be delayed while waiting for delivery. The total performance obtained by using the time filling model is somewhat greater than the throughput obtained by using the overlapping space-filling model. This is because, as compared to the overlapping space-filling model, space-filling allows for more dynamic access to the spectrum pool, allowing for better throughput with a lesser number of small cells.

We suggested a cognitive small cell deployment strategy as a viable solution for effective network planning and resource allocation in a dynamic wireless environment in this research. This will be reflected in the architecture of future 5G communication systems, which will use ultra-dense small cells.

The capacity to modify areas of the cognitive radio network to cope with freshly installed tiny cells results in several network architectural breakthroughs, including optimal infrastructural design and efficient utilization of available spectrum.